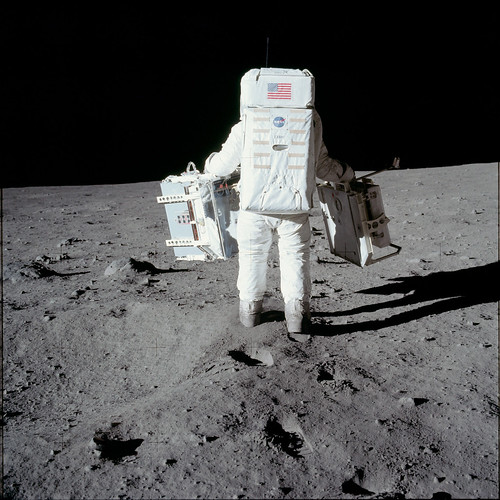 The Apotheosis of Apollo was commissioned for The Thirteen by Clinton Kelly (Matthew Robertson, Artistic Director).

From Melissa Dunphy: "As a teenager, long before I became a composer, I traveled one summer from my hometown in Australia to Huntsville, Alabama, to attend Advanced Space Academy at Space Campâan unforgettable experience inspired by my fascination with science and the space program. Although I eventually switched my career path from the sciences to music, Iâve never lost the wonder I hold for scientific exploration and discovery, and have written several musical works on topics such as the first supercomputer to play music, the scientist Nikola Tesla, and the sounds of telecommunications in the 1980s and 1990s. The beauty of science is not only in its ability to identify and solve problems and bring about progress, but in its inspirational stories that can unite us transformatively as a species; the emotional impact of achievements like the 1969 moon landing resonates even among those of us who werenât yet alive to witness it in real time. As the human race continues to consider its place in our world and our universe, 50 years later, it seems particularly importantâeven urgentâto recall the unifying impact of that moment."

In the beginning was the word:
âWe choose to go to the moon
To land a man on the moon and
return him safely to Earth.â
Then came the day, millions watched,
3, 2, 1 ignition, we have liftoff, liftoff.
Three days to cross the void,
three days to watch
the Earth grow smaller
and the moon to occupy the sky.
A waiting world paused and listened,
âTranquility Base here, the Eagle has landed.â
For one brief moment, this voice from another
world, moved the spirit of every human.
âThatâs one small step for a man,
one giant leap for mankind.â
We began as wanderers and we will
wander still, where stars are spun and
worlds begin and the Universe waits.
Excelsior, excelsior, excelsior!
â Clinton Kelly